The National Prize on Life’s Work "Niketë Dardani" was awarded to the composer Akil Koci
Share: 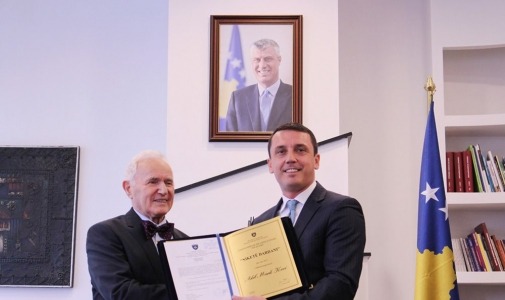 Cultural heritage is defined as one of the priority sectors of the Government of the Republic of Kosova, as defined in the Program of the Government of the Republic of Kosova 2015-2018 and in the Medium Term Expenditure Framework 2015-2018. These documents and other respective ones form the institutional foundation in drafting of this National Strategy for Cultural Heritage from 2015-2025; the legal base is constituted by the laws in force, namely: The Law on Cultural Heritage, the Law on Special Protective Zones, the Law on Historic Centre of Prizren, the Law on Hoça e Madhe, the Law on the village Zym; other laws (the Law on Spatial Planning, the Law on Archives, Museums, etc.), legal and sub-legal acts, including the provisions of European cooperation and international conventions which are ratified by the Republic of Kosova.

The Kosovo's cultural heritage is an expression and creativity of life realities developed over the course of over eight thousand years, since the prehistory continuing up to today. This inherited treasure of unique artistic, aesthetic, historical and traditional characteristics values, is illustrated by the rich diversity of architectural, archaeological, movable and spiritual heritage, as well as with rich cultural landscape.