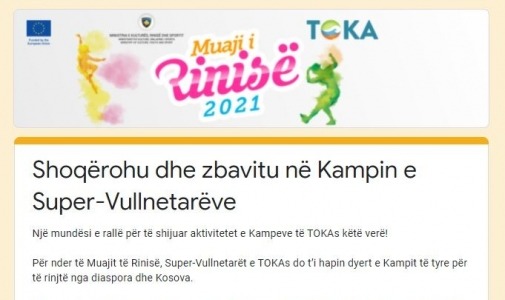 “Albaniada”, a competition event to promote and cultivate cultural heritage

The village of Kukaj, nearly 30 km to the east of Prishtina, played host to the second edition of traditional games “Albaniada”, an event that serves to present aspects of ethnos through games, music, humour and dance. The competitors in 20 games provided great entertainment, which made the event even more appealing, a no less important part of promoting and cultivating our cultural heritage.

Present at the opening of this year edition was the Minister of Culture, Youth and Sports, Memli Krasniqi, who along with the event facilitator Ekrem Tahiri, lit the torches, thus marking the start of competition. Minister Krasniqi said that these events contribute to protection, preservation and cultivation of our cultural heritage.

“We are gathered here at the second edition of ‘Albaniada’ to promote one of these important elements of our heritage, our traditional games and sports. If the first edition of ‘Albaniada’ was about promoting this important part of our heritage, I am glad that this year, in addition to the element of promotion we also introduced an element of competition, which was always at the heart of these traditional Albanian sports”, said Krasniqi at the opening ceremony.

He further stated that it had been the goal of MCYS to expand and ensure wider participation that would transcend the geographical borders of Kosovo through activities of this nature such as this particular heritage event. “It is our goal and objective to ensure that in the coming years, Albaniada may accommodate more sports and games, participants and teams so that our traditional sports and games may be represented by a larger number of Albanian areas, transcending Kosovo, including regions where Albanians have been living for centuries,” said the Minister of Culture, Memli Krasniqi.